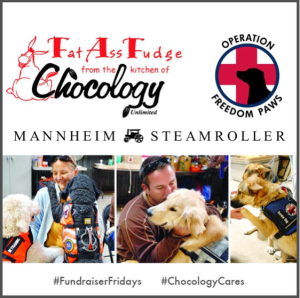 Do you remember the Chocology Gives Back Road Trip that we took almost a year ago? We sure do! From April 17 to May 15, 2015, Madeline and I drove coast to coast with a focus on giving back to the community. We had so much fun and met so many wonderful people along the way.

When Madeline and I got the opportunity during our trip to tour the Mannheim Steamroller studios and meet Chip Davis, the genius behind this musical wonder, we jumped on it! Seeing Mannheim Steamroller in concert has been a Christmas tradition with the Johnson family for many years and meeting Chip was a dream come true for us. Their inspiring music along with their “give back” mentality attracted us right away, so we weren’t going to pass on this opportunity! Not to mention, we had to ask about the origins of their song “Chocolate Fudge” played on their album entitled, Fresh Aire.

The studio was magnificent! It felt like home as soon as we walked in. The atmosphere was friendly and respectful and it felt as though everyone we met was genuinely glad to see us. It didn’t take us long to realize that the team behind the scenes works in just as much harmony as the band. All of the staff, from the receptionist to Chip Davis himself, was a delight and we enjoyed our visit very much!

In our interview with Chip, we learned that he is passionate about helping military service people and veterans. He believes that much like life, music is a gift, and he has truly given the gift of music to our service men, women and veterans. In the “A Million Reasons to Be Thankful” campaign, Mannheim Steamroller gave away 1 million Christmas CD’s to U.S. Troops domestically and in foreign countries! Now that is what we call giving back!

And. . . we found out that the song “Chocolate Fudge” follows “Prelude” on the Fresh Aire album. “Prelude” starts out gentle and classical. After the first few notes of “Chocolate Fudge” however, things start to pick up and the music is transformed into the musical wonder that is Mannheim Steamroller. We love that Chip chose the name “Chocolate Fudge” to signal the beginning of the transition from classical to modern.

Since Mannheim Steamroller and Chocology both agree that giving back to our communities is where it’s at, we were so excited to get an opportunity to collaborate with them for the Easter egg hunt hosted by Operation Freedom Paws this weekend. Operation Freedom Paws, if you remember, is one of Chocology’s #Chocologycares organizations.  Operation Freedom Paws empowers veterans and others with disabilities to live a quality life by teaching them to train their own dogs, and certifying them as service dog teams.

Chocology will be donating a huge Easter basket for the event. We will also be represented there with Fat Ass fudge samples for everyone and doggie treats for our furry friends. Mannheim Steamroller is teaming up with us to donate 90 of their American Spirit CD’s to the veterans at Operation Freedom Paws. It’s so exciting to have the chance to work with Mannheim Steamroller for this event. We are truly grateful to have such wonderful partners on this chocolate journey!

We hope that you and yours have a wonderful Easter holiday this weekend ~ filled with fun, family, friends and chocolate, of course! The Magical World of Chocology